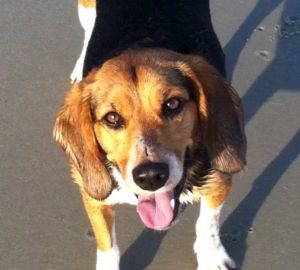 Hi.  My name’s Sam.  I’m subbing for BlogAngel today, because she’s sick with something called blog-writer’s block.  At least, that’s what she calls it.  If you ask me, it’s more like, laying-around-in-my-pajamas-with-an-attitude-in-the-middle-of-the-winter-writer’s block… but that’s just me.  What do I know, right?  I’m just a hound dog she sprung from the can a few years back, and nobody asks what I think about anything.  Now, I’m no Einstein, but I can tell you one thing, you aren’t going to burn up the tar to riches, sitting around in your pink, checkered pajamas, while the early birds are out there catching worms, and you’re just catching some more zzzzz’s (Johnny D says stuff like that when Mom’s moping around, and it really ticks her off).

So, I thought I’d sneak up here on this fun, swivelling chair, and take a stab at this writing thing, which, by the way, looks really booorrrrring to those of us who’d prefer to run around in crazy eights on the beach.

Hey. How hard can it be, right?

You just sit here and push down on these keys, and you don’t even have to have opposable thumbs; I know, because when I need Johnny D’s attention, I have to stand on his desk and stare at him, and that’s when I see him typing with just his two index fingers, really slow-like (sometimes swearing in between the key punches, and sometimes shouting down to Mom – that’s BlogAngel – “How do you spell, mozzarella?“).  So I know, any idiot can do this writing thing.

So, I’m known around here as the Beach Beagle, but I didn’t start out as a ‘beach’ anything, because, well… I’m from Providence – which is a city in Rhode Island, a BIG city, the capitol city where Johnny D’s from, too – and to be truthful, I’m a beagle mix.  Which, really doesn’t mean anything, Mom says, except that the “mix” part of that label adds spice to my character.  She’s always saying stuff like that about me, because… well, Mom loves me.

I mean, REALLY loves me.  I know, I know, you think you love your dog as much as Mom loves me, but there’s no way… no.  She’s my soul mate.  I knew it the first day I laid eyes on her and she knew it, too.  We HAD to be together forever.  But, there was just one problem with our romance back then; see, I was living in the city shelter, on account of, I got cut loose by my hunting pack, and I kinda’ had a rough time of it for a while in those early years.  I got picked up a couple of times for stealing food, and both times, nice families came and bailed me out (with just a few dollars, called an adoption fee).  But, for some reason, I dunno… something about chewing, biting, baying (What the heck is baying anyway?), the families kept dumping me back in the can.  They were always sorry, but we had a good time, right?  Jeez!  How was I supposed to know that the rubber bone I was chewing while lying on Grandma’s lap, was an oxygen hose!  Who knew?  Why didn’t someone say, “Sam, don’t chew Grandma’s oxygen hose?” or,  “Here Sam, have a treat, Grandma needs the hose to breathe.”  No.  They just all assumed that because I was housebroken, I knew everything already.

So anyway, Mom had a husband named Johnny D, who would never, never, NEVER, allow a dog near their apartment because he thought they should own a house before getting a dog, and…  Okay, so I guess that’s two problems we had with our early romance; I was in the can, AND she had a husband.  Oh boy, when I say it that way, I don’t know how we ever made it this far – wait… quiet… I hear the key in the door –

Uh-oh, Mom’s coming, and I’m not supposed to be climbing up and all around the desk, so I’ll have to wind this up, quick;  I just want everyone to know, if you’re even thinking about a pet for your family, then please think about springing one of us out of the clink before shopping around the breeders and puppy mills.  We really appreciate it, and I was thinking last night while Mom was smooching my neck and scratching my belly (she does that after Johnny D. falls asleep on the couch while watching a movie), that if I had one wish for 2013, it would be that ALL my compadres from city shelters everywhere, could have what I have now.  Who would believe, after getting picked up for loitering in Cranston, Rhode Island four years ago, I’d be so lucky to be living here in the lap of luxury on Hilton Head Island, with a dizzy blonde cuddling me every night?

It just goes to show you – woops, here she comes.  Gotta go…

OKAY Mom, I’m done over here! … No, I wasn’t doing anything wrong, and I did NOT chew that yellow sticky-pad on the floor over there… No… it was there, all chewed up like that before I even came into the room…

2 thoughts on “A 2013 Wish From Sam, the Hilton Head Beagle Blogger”

I am a writer of online communications and marketing content. My enjoyment comes from making people smile, think, and love life. Environmental concerns are important to me, as is freedom to choose what is right for me, without harming others. I am liberal-minded, but I enjoy hearing all viewpoints as discussed in coherent, informed, and intellectual settings that rely on fact and truth for political debate. If I can bring light wherever there is darkness, through my presence and through my work, then I feel that I have lived rightly.