Only on Hilton Head

After three weeks of hurricane disaster news and heroic recovery efforts, it’s good to know that anticipated, community-oriented events are still being planned and executed by business leaders who themselves are also recovering from Matthew’s devastation. 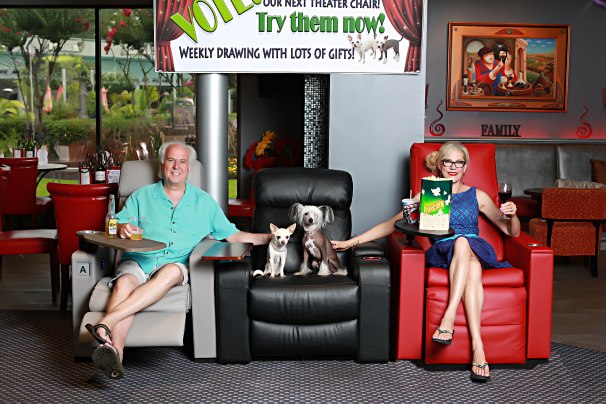 Larry and Lucie Mann enjoy intermission with wine and popcorn at their movie theater in Park Plaza, Hilton Head, SC.

Lucie and Larry Mann, owners/operators of Mann’s Park Plaza Cinema are hosting the Concours d’Elegance kick-off event Thursday, November 3, 2016, in a grand, silver screen party in the courtyard of their business located at 33 Office Park Rd, Ste 201, in Park Plaza just outside the main Sea Pines gate, next to Harris Teeter.

“We’ve been clearing debris from around our business and house, but as they say, the show must go on,” said Lucie on Sunday while she and her husband worked selling movie tickets, bartending, and conducting a Q&A via Skype with the filmmakers of an independent documentary about eating a plant-based diet called, “Eating Your Heart Out.”

It was like watching those motorized housekeepers on that old cartoon, The Jetsons, zipping around on motorized wheels, sweeping, while taking corners, smiling, talking, fielding questions about completely unrelated topics, films, and causes, heads swiveling to take in the whole business while staying focused on the conversation at hand.  I thought to myself, “I want what she’s having,” like the woman in that Rob Reiner movie.

Understand, this kind of multi-tasking is awesome to me.  I had just left my car parked in front of the box office and completely forgot about it for like, fifteen minutes because I had to remember both, buying popcorn, AND getting my mother seated AT THE SAME TIME.  Lucie carefully, kindly, and discreetly, tiptoed down the aisle and leaned over to me in the dark, saying, “Carmen, can you please move your car, so others can drop off their guests in front of the theater?”

Delicately implied at the end of that question, of course, was the word “numbnuts?”.

Lucie Mann’s original, hand-crafted earrings, “No Two Are Alike”, are sold in the movie theater for $15 – $30/pair.

Lucie and Larry both bring an array of skills and talents to their partnership, which always culminates in amazing productions at their business.  Lucie is an architect by trade.  She also crafts her own earrings, and participates in local events that promote healthy, organic cooking and eating.  Larry’s background in contracting dovetails perfectly with their shared passion for neighborhood and community events, and of course all of these interests logically pointed them to buying a movie theater, right?

So, thanks to their shared passions, on November 3, 2016 at 5:30 pm, islanders will get a glimpse of Hollywood glamour, in the shape of one of the ten Aston Martin DB10’s made specifically for Daniel Craig in the latest James Bond movie, Spectre, (which will get it’s premiere Hilton Head screening also at Mann’s Nov. 3rd event).  This custom made car – estimated worth $3 million – is the only one currently being displayed in the United States as EON Productions rolls out its latest Bond movie, which also marks a fifty-year partnership between Astin Martin and EON, the company behind the 007 franchise.

Ilya Kagan, regional manager for Aston Martin, explained the precision and detail that went into the creation of the DB10, as well as the difference between “hero” cars, and “stunt” cars, when it comes to custom designing a car for a film. 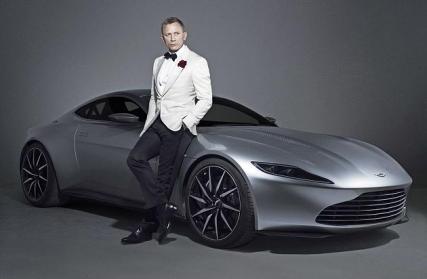 Daniel Craig as James Bond, Agent 007, poses with one of 10 Aston Martin DB10’s made for the movie, Spectre, premiering on Hilton Head November 3, 2016 at Park Plaza Cinemas.

For the movie, Spectre, ten Aston Martin DB10’s were made.  Some were stunt cars, driven by the stunt doubles for the movie’s action sequences, and others, termed hero cars, are piloted by Daniel Craig as James Bond.  Unfortunately we, drooling cinematic plebeians, don’t get to know which of these cars will be on site at the Park Plaza Cinema courtyard on November 3, 2016.  But hey, who cares, right?  A three million dollar car is a three million dollar car, no matter whose derriere graced the driver’s seat, in my book.

“We at Aston Martin The Americas are excited to be able to bring this piece of cinematic history to a local movie showing at Hilton Head, SC. This is a very extraordinary vehicle, with only ten of them made, and with one of the examples of this car being sold On 19 February 2016, at a special auction at Christie’s in London for £2,424,500, or about $3.5 million, it makes for a very rare opportunity to see something like this in person,” said Kagan.

Attendees will get photo-ops with the DB10, wine, hors d’oeuvres, and a screening of

Sounds like Vincent Chase’s sneak preview party in the movie Entourage, right?  Only, we’ll all keep our clothes on during the party, ‘kay?

I am a writer of online communications and marketing content. My enjoyment comes from making people smile, think, and love life. Environmental concerns are important to me, as is freedom to choose what is right for me, without harming others. I am liberal-minded, but I enjoy hearing all viewpoints as discussed in coherent, informed, and intellectual settings that rely on fact and truth for political debate. If I can bring light wherever there is darkness, through my presence and through my work, then I feel that I have lived rightly.

Luke Cage: Our Side of the Story